There is and has been no other writer quite like Ursula Le Guin. She had such a facility with language, such a keen mind for philosophy, and her books are astonishing and wonderful. They can only be called science fiction by virtue of their settings on far off planets, but for all other purposes, Le Guin's novels are purely literary.

Shevek is our hero, a middle aged man from Anarres, the moon of Urras. A century and a half ago, Anarres was colonized by Odonians, anarchists who revolted against the capitalists of Urras and founded a new society. On Anarres, there is no ruler or ruling class, there is no money, and there are no walls except one - the wall which encircles the Port of Anarres, the only place on the planet that ships from Urras, carrying materials and letters, are allowed to land. When Shevek determines to visit Urras, the first to do so since Anarres' founding, he is met with virulent recrimination. His time on Urras is complicated and confounding; Shevek is disturbed by the economic imbalances and the restriction of women to the home. In the end, he determines that neither society is perfect, but that they could learn much from each other.

Le Guin turns a harsh mirror on our own society with this glimpse into the alien, and my humble review cannot possibly begin to do her justice. 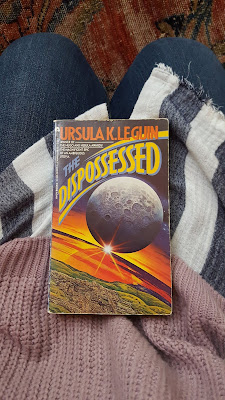