The City in the Middle of the Night, by Charlie Jane Anders

I simply adored Anders' first book, All the Birds in the Sky, that came out a couple years ago, so I was looking forward to this, her second. I was, unfortunately, really disappointed. The concept is interesting - a tidally locked planet that was settled by humans: with only a thin strip of land actually habitable (freezing night on one side, boiling day on the other), how do humans adapt to the lack of diurnal cycle? Not well, apparently. And perhaps we can give Anders the benefit of the doubt and assume that her stilted writing style and confusing timeline were intentional, meant to evoke in the reader this sense of timelessness and unease, but the novel we are left with is just too odd to be enjoyable.

It doesn't help that our main character isn't really likeable or relatable. Sophie is exceptionally timid and vacillating at some times, wildly brave and violent at others. It smacks of mental illness rather than complexity. Plus her obsession with her friend Bianca is just overboard ludicrous. People are generally dumb when it comes to love, but Sophie is supposedly one of the smartest people in her large city, and she's apparently too dumb to notice Bianca's obvious obsequiousness and manipulation? Mouth, our other main character, is only slightly less annoying. Sure, she suffered the trauma of watching her entire nomadic family-band die, but nobody is THAT confused about their own emotions literally all the time.

We have no real sense of how old these people are, how long ago something happened, how long they've been doing something, and yes, I get that that's all a symptom of the lack of night and day, but there's also more ways to express time than just, "a long time." How about describing people by the lines on their face, the color of their hair, how recently they went through puberty? Is "a long time" long enough for hair to grow from chin to shoulders, or the time it takes to count to 100? The story is disjointed, repetitious, and frankly, kind of boring.

The only great thing about this book is the Gelet, the sentient, highly advanced species native to this planet. I'd happily read this entire book from the Gelet's perspective instead. I can't help thinking of the James Tiptree Jr. stories told from alien perspectives and how well they worked, and wish that this book was a little bit more like them. 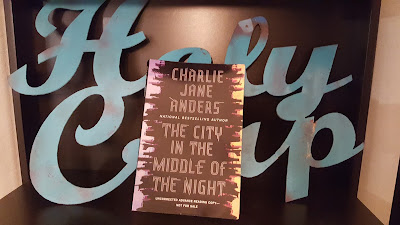