One day, a little girl is running through the woods near her house when she suddenly falls into a deep pit. When she comes to, the walls around her glow faintly green, and the rescuers above see that she is standing in what looks like an immense human hand. Over a decade later, this girl, now a woman, heads a small team of scientists and military personnel as they work to uncover the hand's secrets, and to locate the other pieces of its gigantic body.

The narrative of this story is told in audio logs and interviews between an unnamed, practically omniscient man and various members of that team or the United States government. The story and format are clever, but the constraints of the interview as narration lead to some awkwardness. Our interviewer asks his subjects to describe people or events; they oblige, but they sort of all end up sounding like the same person, or just far too skilled at telling stories for who they are supposed to be. For example: "She's built like a swimmer: long legs, very strong, and shoulders that would put most men to shame." That's supposed to be an Army helicopter pilot in his mid-twenties, describing another character. Very few people actually talk like that, and it's bizarre to read in this context. What the author needed was a way to describe his main character that fit within the format of an interview, but he didn't quite succeed. The book is filled with awkward moments like this, and each one takes you out of the flow of the story, which is a shame, because it's a fun story.

There's a good mix of a mystery, science fiction, human history and theology that make this a unique read, but I think the idea would have been better served by a more traditional narrative structure, or perhaps a more skillful author-editor team. I enjoyed the sense of discovery it created in me as I read, but will probably not be seeking out the sequel. 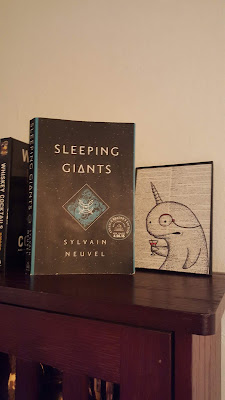