Ronan Boyle and the Bridge of Riddles, by Thomas Lennon

Some people might recognize this actor’s name, and if you don’t, you’d probably recognize him if you saw a picture. He’s known for comedy, having co-starred in the TV show Reno 911, and one of my favorite cheer-me-up movies, 17 Again. So it’s no surprise this middle grade novel is really funny and an immense amount of fun.

Ronan Boyle is an Irish teenager with a lot on his plate. His parents are currently in jail for the crime of selling the Bog Man, an ancient artifact they had no right to sell. Ronan doesn’t believe for an instant that his parents are guilty, and places the blame on an obsequious antiques dealer whose testimony sealed Ronan’s parents’ fate. He decides to apply for an internship with the Irish police so he can get closer to the case and clear his parents’ names. Ronan is skinny, nearsighted, and deathly allergic to many, many things, so it comes as quite a surprise when he’s called out to an abandoned castle to help with a mysterious case. Turns out, leprechauns are real, as are other members of the legendary wee folk, and there’s a secret police force tasked with policing them and their interactions with humans. Told in the form of a long diary entry with fantastic illustrations by John Hendrix, we learn about the wee folk along with Ronan as he joins the Garda and shows some promising skill amidst its ranks, all while secretly working on his parents’ case.

Ronan’s voice is precocious and self-deprecating, and readers will guffaw at all the right moments. Written for 10-14 year olds, the book is sprinkled with pop culture references that are charming and will help teen readers relate to Ronan. This is a great next read for kids who loved the Mysterious Benedict Society or the Percy Jackson books. 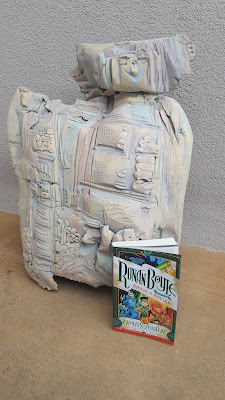