The Far Away Brothers, by Lauren Markham

There is a lot of rhetoric being thrown around about illegal immigration. Trump's border wall was a cornerstone of his campaign, and it's impossible to deny that dealing with illegal immigrants is a costly business for which the U.S. government - i.e. American taxpayers - foots the bill. Markham, a writer and school administrator in the Bay Area, argues that simply building a wall (which, by the way, already exists) benefits no one. Instead, we need to look at the root causes of illegal immigration, and there's no better way to do so than with a case study, backed up with copious data.

The Flores twins (names changed) were seventeen when they left El Salvador. They didn't want to leave, but over the last several years, their home country has been overrun by gangs. Homicide rates are astronomically high, rape is commonplace, and a years-long drought has made El Salvador's once fertile farmlands parched and empty. Men and women, as well as young boys and girls, join gangs because there is no other way to make money, because they're being threatened with violent consequences if they don't, because they have no other viable options. For the Flores twins, gang violence was an everyday occurrence, but it was their own uncle who was the final straw. A feud had been brewing between their father, a poor farmer trying to feed a family of eleven, and their wealthy uncle, who increasingly relied on the gangs to run his illicit businesses. The family doesn't quite know how it happened, but the twins' uncle abruptly decided that one of them had wronged him irrevocably, and Ernesto, the more hot-headed of the two, suddenly feared for his life. After much deliberation, the family sent Ernesto to the North, at the whopping cost of a $7,000 loan with a ridiculous interest rate. When his twin brother, Raul, became a target as well, he joined his brother on the journey to America, aiming to meet up with their older brother who had been there several years already.

The threat on their lives was very real; at one point of the journey in Mexico, Raul was recognized and beaten by thugs, and his female coyote assaulted. They made it to the States but where caught and released into their brother's guardianship, to await a court date that would determine their fate. We are flies on the wall as the Flores twins navigate both their new, totally different lives in the U.S. and the court system. Both are daunting, and the boys miss their family. There's excitement with their lives in America but they don't really want to be there, dependent on their brother and the vagaries of the court, growing from boys to men while also trying to send enough money home to eat away at their $14,000+ debt so their family doesn't lose its land.

What most struck me in this book was the description of the violence these people are fleeing. There's a lot of talk about illegal immigration but very little discussion about why these people leave their homes. Central America is essentially an economic wasteland, and proud Americans croon about how great America is. These people who can barely feed their families on the food they grow are flooded with images of stocked grocery stores and vast fields of vegetables. And El Salvador isn't even the worst place; have you read the news coming out of Syria at any point in the last few years? How about the recent ethnic cleansing in Myanmar? Or Boko Haram in Africa? These people are fleeing for their lives, leaving homes and families because to stay means certain death, or rape, or starvation. I'm not suggesting we take all these people into our country, and neither is Markham. There is room for intelligent immigration reform that addresses the injustices both abroad and at home. Why are unaccompanied immigrant children expected to represent themselves in court or pay thousands of dollars for an attorney? Why do we insist on keeping drugs illegal when the demand in the U.S. keeps the smuggling rings open and thriving? Isn't it unconscionable, or at least very odd, that the CEOs of supposed non-profits that house unaccompanied minors make hundreds of thousands of dollars a year? Why does the myth that illegal immigrants pay no taxes and get all the benefits of taxpayers persist, when it's really the opposite?

Those unsure of how to feel about the many problems presented by illegal immigration should absolutely pick up this book. It's a clear-headed assessment of an emotionally charged issue, a welcome and necessary addition to the literature of immigration, and a worthy successor to Luis Alberto Urrea's phenomenal book The Devil's Highway. And if you're in the Bay Area, go see Lauren Markham speak at an event with Napa Bookmine at the Napa Library on October 25th at 7:00! 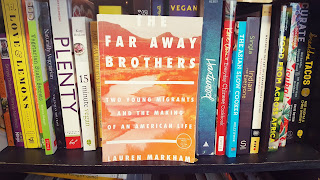