Spineless: The Science of Jellyfish and the Art of Growing a Backbone, by Juli Berwald

Jellyfish are, without a doubt, some of the strangest, most alluring creatures in our oceans. Ethereal yet sometimes deadly, author July Berwald isn't the only person nursing an obsession with these gelatinous animals. Berwald absolutely conveys her wonder, teaching the reader just how truly amazing jellies are, from the complexities of their stinging cells (myriad), to the mysteries of where and why they can sometimes pop up in random waters in the millions (it's anybody's guess, really). She was first drawn to jellies upon reading an article that postulated the jellyfish population would drastically expand as our seas warmed and acidified, but her love of marine science first bloomed (that's a jellyfish pun, FYI) in college, during a short course in marine biology among the corals of coastal Israel.

This book isn't just about jellyfish. It's also about Berwald's struggle to come to terms with the adult she has become: mother of two in landlocked Austin, Texas, textbook writer, and decidedly not a marine biologist like she'd planned. While these parts of the book are interesting, it's hard not to feel like Berwald is using the book a little like a therapist. I caught myself wondering a couple times whether she was trying to tell us that she really didn't like being a wife and mother and the ichthyologist surfer she followed to several different cities was the one who got away. As the book goes on, she assures us that she does in fact love her kids, and notes on more than one occasion how lucky she got when she married her husband, so that tension softens as we continue reading. And while she pursues her jelly obsession, she continues to work at her day job, so this isn't exactly a manifesto for dropping everything and turning your life around.

For the most part, I was utterly taken with Berwald's jelly fascination, and it's entertaining and quite informative to be taken along for the ride as she pursues the subject over several years. I had no idea that people ate jellyfish, nor that entire blooms can be sucked up into the cooling systems of power plants and shut down whole cities. There's a jelly that literally zips its mouth shut upon catching prey, a seal so tight that the surrounding tissue will tear before the zippered lips can be forced open; robotic jellyfish are being tested for spying applications, and the construction of these robots taught us a key component of the physics of movement. This is a wonderful book for anyone interested in the animal world, marine biology, oceans, and the controversial subject of human-environment interaction. Those looking for insights into the quest to follow one's dreams might want to look elsewhere. 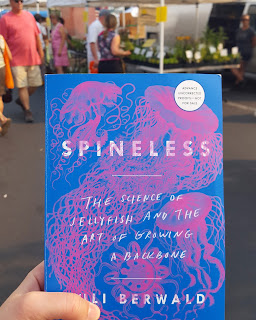