We need to make a bundle: Michelle Alexander's The New Jim Crow and Danielle Allen's Cuz. The former explains how the War on Drugs has been used to incarcerate black and brown Americans at an astounding rate; the latter is a case study in how this affects individuals and communities.

Michael Allen was 15 when he was tried as an adult for a failed carjacking; he then spent 11 hellish years in prison. He violated his parole about a year later, spent another two in prison, then was killed by his girlfriend at the age of 29. His cousin, classical scholar Allen, tracks the story of his life within the context of an all-consuming gang culture, the ravages of endemic poverty, and a nation's growing terror at a threat that didn't really exist. Cuz provides a much-needed face to a problem that would otherwise loom so large as to seem insurmountable. Michael, it seems, never had a chance.

Allen, at the end of a rather chronologically disjointed narrative, argues that the best way to deal with the problems of racial profiling, mass incarceration, overflowing prisons, and mounting drug addiction is to legalize marijuana and decriminalize all other drugs. She points to Portugal's efforts in doing just that, and how it's turned out very well for that country. One could also use this book to argue for a national basic income. Michael's mother, Karen, is intelligent, law-abiding, and well-meaning. But none of these things could prevent her three children from having to deal with - and join - the gangs who ruled their turf. Karen had to move to LA because that's where she could get a good job, but it landed her kids right in the middle of the growing, drug running gangs. Michael resorted to petty theft to get the money he wanted to buy new clothes, and eventually, a gun. Reading through these challenges Karen's family faced while Danielle's own family (Karen and her father are siblings) prospered in collegiate Claremont, I can't help but think that a basic income could have saved Michael's life, and his siblings a lot of violence and grief.

Drugs, gangs, poverty: these are systemic problems that can all to some extent be resolved with some major changes to the way our society operates. With Trump's election and the Charlottesville violence so close in our rear view mirror, I wonder if there are segments of our population who do not, in fact, want any of these changes to occur. They want to keep black and brown people down, and continue to believe that poverty is somehow reflective of a person's inner worth, rather than the result of accidents of birth. America failed Michael, and in failing one man, it's failing us all. 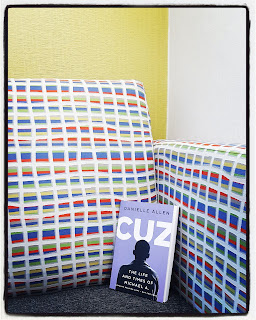